I don’t think I told y’all about this, and I can’t believe it’s been TWO YEARS. How did that happen? I remember this like it was just yesterday, dammit. Please, let me share my first trip to Dubai back in May 2013.

This one’s for the books. Brace yourselves, this post has more than 50 photos.

Alright, so where do I start? Let’s get the obvious out of the way : In 2013 I’ve already known the boys for about 3 years. I’ve never been anywhere else outside of Jeddah, never been on a trip with friends that needed me to hop on a plane.

Whoa, that day gave me a whiplash. Someone who I consider to be my angel / close friend helped me out in so many ways for me to push through with my trip, I can’t even explain. God bless him (Nof and Drew, too!!! I laugh whenever I remember how that noon went, what an experience).

Anyway, this was something the boys and I planned together, but I guess they never really thought I would go (surprise, fools!), but I did, and thank God! It’s a trip I would never forget.

There was a bit of kerfuffle before I boarded the last Bus en route to the Plane. I got in, looking for familiar faces while wearing a stupid smile on my face. Then more kerfuffle ensued upon arriving the Hotel in (ta-da) … Rigga. We held a small meeting at our temporary Hotel’s lobby, figuring out a way to fix said kerfuffle before we gave up (deciding we should all eat and get ourselves out of the pickle the next day, since it was around 11 in the evening). And so we walked to the nearest Restaurant that served (ta-da) … SHAWARMA (LEL). And ate.

You can tell it was 2013 because we were all on our Blackberries, hrhrhrhr.

The next day, after forcibly getting each other out of bed (this involved banging on doors, jumping on beds, throwing duvets on the floor, and the like), the guys went to find another Hotel while I got ready.

Turns out, we found one in (what now turns out to be my favourite hood), Al Barsha. We headed there, and settled our stuff. It took an hour AT LEAST for the guys to get ready, and I was in the mood for a nap. Thankfully, they did not leave me. Hrhrhrhr.

Side note : Here’s a funny story. Since it was my first time traveling to Dubai, I went online and researched on what is “acceptable clothing” for Women to wear while in the City. I ditched all my fasyon clothes that I already packed and stuffed mostly oversized Tees in my luggage which I would later regret – good thing I brought a couple of decent, but with “oomph” tops (ano daw). Of course I did better the next time I was in Dubai (which was October 2014, and definitely the next time I will be, *wink wink*), but it did feel pretty good to know that I was being respectful to some of the conservative locals. The last thing I want is to be approached for wearing my pem pem shorts.

There was a Football Freestyle Show going on, sponsored by Red Bull (the beautiful Raya Abirached was there to host, mashaAllah). And of course, the Boys had a show of their own while the program was on break. Crowd loved it.

The next day, the guys headed to the Open Beach in Umm Suqeim (a favourite, I prefer this more than the JBP). Say “MashaAllah”, okay? I’m blessing your screens with these beautiful creatures, hehehehe.

I had other stuff to do but I passed by for a few minutes to see them at the Beach before heading to Dubai Mall myself (to do a little bit of shopping because you should see their faces whenever I try to drag them to a shop I wanna check out LELZ, except for Muha, who often tolerates my whining and gives in to go with me to the girly stores, hrhrhrhr).

We all met at the Hotel afterwards, where we made use of my Instax, ate, and hung out a little … until, you guessed it – they fell asleep. HAHAHAHA. Well, not all of them.

Yep. The guys on their Laptops, the guys on their Bed, the guys and I talking, me taking videos and photos… IN THE CONFINES OF THIS ROOM, ugh. But okay, I’m not complaining. Anything we do together is fun anyway. It could be a staring or silent contest for all I care. Which actually happened because they were SLEEPING MOST OF THE TIME (#)@#^%&@*#% … Okay, yeah. Not complaining.

Sami and Waleed were the ones who ended up sleeping early, so Mrwan, Muha and I headed out. We haven’t been to Mall of Emirates yet so we decide to go there. Then went back to the Hotel to have Ice Cream.

We called it a day. The next morning, we went to Wild Wadi.

Can I just say : The boys are super fun to be with but they’re terrible with Time Management. Seriously, one activity per day? What the heck? *grunts*

Not much photos taken at Wild Wadi, they had so much fun trying all the rides. Went back to the Hotel, had Kabsa (ate it on the floor yo, das how we do), and then, you guessed it : THEY SLEPT #&@#*^%#@%*# … I don’t even remember what I did that night to kill time? … Oh right, I took selfies in the room and watched MTV (which played the same 8 songs over and over, but I’m not complaining because I love Boyfriend and Heart Attack and Just Give me a Reason, and That Power and Work Hard, Play Hard and Pompeii … ) until I fell asleep. UGH. We went back to the open beach the next day.

Someone was wearing Crocs! His name starts with a W! No judgment though, BUT WHAT ARE THOSE LELELEL okay 5la9.

I was such a flabby bunny! But I was really happy about it that I didn’t even care I was in a two-piece Bikini, exposing my cute, wiggly belly. Hee!!! These guys never even bullied me about it, never shamed / made fun of me for my swimsuit choice/s. Talk about LOVE and RESPECT and PROPER UPBRINGING! That is true friendship, people!!!!

We spent most of the day here, showered back at the Hotel and went to Dubai Mall to stuff our faces with fooooood. Glorious food.

Loving our tans, loving it!

Waleed flew back a day ahead of us the next morning (because he’s stupid, also he didn’t wake up early, regardless of how hard Mrwan and I tried to get him out of bed so he and I could both go to the Airport to reschedule his flight, UGH, A7bl), and we were all pretty bummed about it. I hated him that day, he ruined the fun for us (LELJK na half meant). And may I remind you / myself / us : The night before, we both tossed a coin, betting that if I won, he would stay. I WON BUT HE DID NOT STAY, THE A7BL. UGH.

After we fake cried and chased his limousine as it drove away from the hotel, we decided to go to Atlantis with a heavy heart (LEL), Mrwan mostly moping that his Brother had gone back to Jeddah. Okay, basically all of us were moping (but mostly me and Mrwan. Hahahaha). We tried to make the most out of it. They pretty much hated me too (displacing their temporary hatred for Waleed LELELELEL), for suggesting we went to Atlantis, because they wanted to go back to Wild Wadi (and I didn’t because the rides were too … Wild). But hey, we took pretty awesome photos at Atlantis, which was why I wanted to go HRHRHRHRHR.

This where I meet Lexy the Dolphin! I felt quite bad for supporting this but I just wanted to fulfill my Mom’s dreams of “interacting” with a Dolphin. She was more obsessed with them than I am.

Best advanced Birthday gift to myself ever. After that, I successfully trained all the Dolphins in under 30 minutes to jump over the stone wall separating them from Freedom, and they all made it across as I raised my fist to the Heavens.

We didn’t spend all day in Atlantis, it was barely late afternoon when we dropped our things off at the Hotel, and they dragged me out without even giving me the chance to rinse myself off of Saltwater and other germs acquired from the Waterpark. Although, they were kind enough to give me 5 minutes to wash my face (and other unmentionables), and spray on Deodorant. I DIDN’T EVEN HAVE TIME TO DO MY BROWS. NOT EVEN MASCARA. They were that serious. I went to Dubai Mall looking the way I did, but I was happy because I got myself this bag of precious Macarons. My first!

I compiled a video (a third one I did of us and the boys, I think) which mostly had footage from our Dubai trip. You would be able to tell which is which. And I’ve uploaded this on my blog tons of times but I will never get tired of it.

Now I remember why I didn’t blog about this, because I video blogged about it! Ha. Look at how giddy I was. I’m still as giddy whenever I look back on that week.

There were times when I certainly felt like I needed to take a step back because it was too overwhelming, the whole thing. I mean, I’ve only lived in Jeddah apart from the Philippines my whole life, and I consider myself to be pretty sheltered. This trip was definitely out of my comfort zone, and I couldn’t feel thankful enough for doing it.

That pretty much concludes our near-week stay in Dubai. There are other stuff that happened that we don’t have photos of (like that time we spent at the Hotel Bar, among others), and I feel blessed and grateful that I have so much memories of my first trip out of the country with these clowns, captured in photo, video, and most importantly : Memory.

You should go on that trip with your friends. Or plan something and FINALLY push through with it. It’s a decision you will never regret, and forget. To have memories like this are priceless. 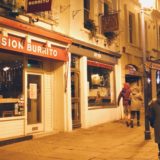 Holidays With The Family

@@abbiealmasco Hey Fronds, I’m in the middle of “setting up” (more like reviving) my YouTube Channel — would mean a lot if you gav… https://t.co/HwNMDbLxMI
Tweeted on 6:08 pm Jan 15
@@abbiealmasco Finally devouring Bridgerton tonight 🥺
Tweeted on 3:37 pm Jan 08
@@abbiealmasco Why is Cobra Kai so good 😩💛
Tweeted on 2:34 pm Jan 08