Am I seriously typing this entry again? Wasn’t I just typing last week’s yesterday? … Jeez. Time flies when you spend most of your days with the Sandman. Which reminds me, I have to catch up on my reading.
1. BUH-BYE NOSE ZIT. My humongous, disgusting nose pimple cleared this week. Again, I’d post a photo but I like you guys too much. Drew got me Fucidin (who knew this shit works on zits? I didn’t), then I of course used my trusty Sudocrem to prevent the dark patch from being a permanent resident on my skin.
2. COSMOS. I’m so glad I stumbled upon a review of this 12 part documentary because IT IS … there’s no word for it. If you want to make your problems seem irrelevant, try watching this documentary. I felt SO small but in a positive way. Of course there’s Neil deGrasse Tyson, who I sometimes find too arrogant (especially when I read his Tweets, and this was way before I started watching Cosmos) but at the end of the day, can’t find it in myself to not like him. He’s too awesome. AND SCIENCE IS TOO AWESOME. I’m kinda proud that I’m one of the few Christians who is totally into and supportive of Science. I don’t know. I was never the type to spark up a debate between my beliefs and what Scientists have proven so far. I don’t really care, you know – my Faith never and will never falter. I will never question God’s creations and what He is able to do, and I don’t feel the need to “prove Science wrong” by whipping out my Bible and reciting a verse. I respect Science too much, I’m too amazed by it. At the back of my head, I know God’s responsible for it. God is TOO big and He is infinite. We will never really understand His ways.
3. JOLLIBEE. I haven’t had Jollibee in ages so imagine how happy I was when Drew told me we were having Dinner there. I forgot to take a photo because of how HANGRY I was.
4. TOCINO. Chicken Tocino!!! 4 Packs of it! In our Fridge! I am the happiest child.
5. WORKOUT/DIET RESULTS. So far, this is what I’ve achieved. As you know, the hardest to get rid of is the freakin’ stubborn lower belly fat. There are days when my tummy would be flat. nearly Kenny Jenner level, and then the next day, I bloat. Of course, when I got sick, everything was put on hold. You know how it is. 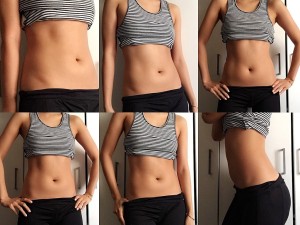 6. THIS GEM. I was sorting through stuff and found a couple of new Cassette tapes that were obviously set aside by Mama. There’s also the Little Mermaid OST, and Jose Mari Chan’s Christmas Album (a.k.a. the Cassette Tape I would clutch even in my sleep at 5 years old). I don’t know why we have new ones, but of course I have my own unopened (with accompanying laspag na leaflet) tapes somewhere in the other boxes.

7. THE JENNER SISTERS’ APPS. The days I couldn’t sleep (basically every day of the week), I would spend hours on the girls’ apps. I love them so much. Kylie’s glam videos inspired me to try new tricks in applying make-up. and Kendall’s videos on the other hand, inspires me to go au naturelle. I love them so much.

8. GEL POLISH. I got a new shade of  Gel Polish from Nails Inc., my now go-to brand for Nail Lacquers. There’s always going to be Chanel though (of course), which mostly takes up my Lacquer shelf.
9. THIS GIRL. Went to Tahlia with Nof, supposedly shopping for her next trip, but there was a small boo-boo so we decided to wrap up early and have dinner at Shake Shack (I haven’t been in years, by the way).

10. JEDDAH LIVE ON SNAPCHAT. Jeddah is a very humble city, with very rich culture and history. It’s a perfect mix of both modern and low-key. You can’t see it on Snapchat, of course. It may not be a Tourist attraction, but Jeddah is Jeddah. It’s home. I will love it no matter what. The best part is, someone took a Snapchat of my hood! That’s a gigantic Bike, which is a Landmark and a Roundabout (the base is under renovation).

Aaaaaaand that’s about it. I’m shivering in front of the computer (A.C. is directed at me) so I should stop yapping. Have a happy and blessed weekend, kids.