I honestly do not see the point of even typing this because this echoes how the World feels, collectively. But writing has helped me A LOT. I have been journaling on almost a daily basis — and even if it’s just mostly word vomit, it does clear my murky head, AND, it has helped me *sort things out.

I try not to focus on current events so much — I think it’s helped me stay sane to date, being locked up at home, not really able to do anything to help the world, as a whole (what an Aquarian thing to say, heh), I do not know what else there is for me to do, given my current situation and the little power I have, except, well, stay at home.

I am aware that the whole world is on pause right now. Well, okay, not really — WE ARE, though. The world turns, people die on a daily basis at an alarming rate, people are losing their jobs, their homes, their loved ones … I go outside and it feels … I don’t even know how it feels anymore. The word “new normal” really irks me, because I am in denial. Wearing masks and gloves and all this social distancing is not my new normal. I enjoy my solitude but this restricted movement (let alone, being prohibited to make any movement at all), is not my new normal.

DO NOT GET ME WRONG : I appreciate that these restrictions are being imposed because it’s the only way we could get things going, and hopefully back to being mask and glove-free. I’m not mad at the restrictions, I’m mad at the fact that we DO NEED THESE RESTRICTIONS.

See what I mean when I said I was just echoing what the world was feeling collectively? But this is my blog, so shut up, and let me rant in peace. Lel.

It’s so annoying that it’s caused a lot of strain in my personal relationships too (there’s one in particular I’m referring to … eggshells), because I barely get to see people I want and need to see, I barely get to talk to them, barely get to even initiate conversation because of fear that I’m nagging them, because I don’t know what they’re going through or are they in the mood to talk, or let alone — THINK, about answers to my questions such as “How are you?”, “How are you holding up?”, “What have you been up to?” which are such mundane questions but I am genuinely fucking concerned with. I WANT TO KNOW BECAUSE I AM WORRIED NOT BECAUSE I DON’T THINK YOU CAN’T HANDLE IT, BECAUSE, YOU KNOW WHY. I am aware we are all adults here but sue me for caring, dammit. But also, I know these aren’t questions that need to be asked right now, because HOW DO YOU THINK PEOPLE ARE DOING, BRENDA?

We’re dealing with A LOT of things, I know that. I just wish there was a way for me to let my presence be known or felt without suffocating them. Do they know that I’m just … here? In silence? Sitting in the corner like freaking Puss in the Boots (let’s go with the Shrek version), cheering them on?

I have been so silent, and not by choice. It’s more of giving people space, which is silly, considering HOW MUCH SPACE THERE IS ALREADY BETWEEN US.

Don’t get me wrong, I’m not mad. I’m not pissed. I’m just … missing people. I’m missing the short amount of time I get to spend with them on a nearly daily basis. I miss the stupid small talk and the cute bantering. Also, is that going to change as well? Will everyone be staying away from me, literally, until we get a vaccine? BECAUSE DAMN.

I know people don’t really need me or my support at this time especially when they have a support system already, but man … I just wish I could be there for them. JUST TELL ME ABOUT YOUR DAY, DAMMMIT. TELL ME WHAT’S WORRYING YOU EVEN WHEN IT’S OBVIOUS. JUST TALK TO ME (andletmebabyyouwhatIdidnotsaythat).

ANYWAY — how much longer are we left in the dark? How much longer should we be assuming of how things are going to be? How much longer are we supposed to watch the world crumble before we get to pick up pieces of our lives, before we start thinking about our future, because all those things we had a faint idea of, have, well, safe to say … gone down the drain. I would like to be proven wrong on this, would be nice. Right now though, it’s pretty much wishful thinking that our “plans” are not totally affected.

I would say “2020 is a joke”, but that’s disrespectful. It’s not funny, not even in a sarcastic way. People would say “this is a massive shift”, but I do not agree with that either. This isn’t a shift. This is a fucking reset. Only the button’s being pressed down slowly.

NOPE. SLOWER THAN THAT.

This Is A Love Story (LOLJK I’m Ranting) 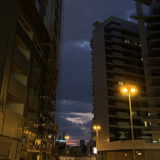